Background: Peripheral neuropathy is a central feature of  leprosy. Intraneural inflammation caused by  M. leprae is the  morphological hallmark of this disease,  FNAC of sensory cutaneous nerve has proved to be a valuable diagnostic tool.Materials and methods: The data of patients with sensory cutaneous nerve involvement were retrieved from our record for the period from Nov 2014 to Sept 2015. The hematoxylin and eosin (H and E)- and May-Grünwald-Giemsa (MGG)-stained slides were screened for Schwann cells, granuloma, and necrosis. Modifi ed Ziehl-Neelsen (ZN)-stained smears were searched for single lepra bacilli and globi.Results: Twenty-five sensory cutaneous nerves were aspirated. Out of which 19 yielded diagnostic aspirate. Five cytologic pictures were seen - epithelioid cell granulomas (6), epithelioidcell granulomas with necrosis (3);necrosis + lepra bacilli (4); only lepra bacilli (2); and lymphocyte & macrophage infiltrate (4).Following the Ridley-Jopling classification, in our study there were 9 cases of TT, 4 of BT-TT, 1 of BB, 2 of BL, and 3 of LL. Conclusion: FNAC of sensory cutaneous nerve is useful in diagnosis and classification of leprosy on the R-J scale.DOI: 10.21276/APALM.1178 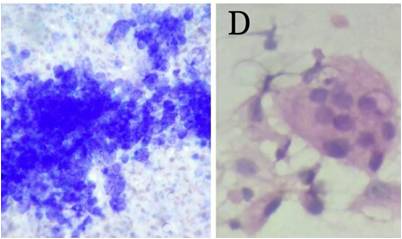