Background: Meningiomas are indolent tumors and their grading is based on histopathological parameters which have inherent limitations. Adjunct immunohistochemical markers are often used to overcome these limitations.Objective: To investigate the role of Ki67 and P63 immunoexpression in various grades of meningiomas.Methods: A retrospective analysis of 144 biopsies of intracranial and spinal meningothelial and nonmeningothelial tumors operated from January 2011 to May 2016 was carried out. Intraoperative squash smears were stained by 1% aqueous toluidine blue and rapid H&E method. Ki67 and p63 immunohistochemical staining was performed on paraffin sections of 125 histologically proven meningiomas cases. Grading was done according to the modified 2016 World Health Organization classification of CNS neoplasms .The results were analysed using statistical methods. Results: The total number of biopsy samples received was from144 cases. There was a female preponderance accounting for 68%of total cases.  Positive cytohistological correlation was seen in 86.14% (125/144 cases). 112 out of 125 cases were found to be WHO grade I tumors out of which 20 showed a high Ki-67 LI and p63expression. 6 out of 7 cases of WHO Grade II meningiomas showed strong ki 67 and p63 nuclear expression whereas 3 anaplastic meningioma cases out of 6 WHO grade III meningiomas showed strong ki 67 and p63 nuclear positivity .Conclusion: The expression of P63 is variable in different grades of meningiomas. There was statistically significant increase of P63 protein expression and Ki 67 LI between the grades I to II and grades II to grade III. In the present study it was observed that 20/112 grade I meningiomas expressed high p 63 immunoreactivity contrary to other studies.  High grade meningiomas showed increased Ki67 labelling index. P63 immunoexpression was high with predictability of recurrence across all the grades. 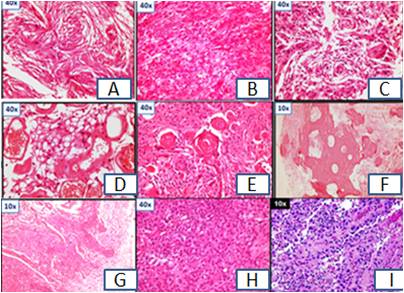