Giant cells in phyllodes tumour of breast: a diagnostic dilemma

Phyllodes tumour (PT) accounts for 0.3-1% of all primary tumours of the breast. Classification of PT into benign, borderline and malignant types is important in determining the prognosis of the disease. Occurrence of multi-nucleate giant cells (MNGC) in PT is a rare occurrence.  Two types of MNGC have been described in mammary neoplasms, the multinucleate stromal giant cells (MNSGC) and the osteoclast-like giant cells (OLGC). Of thirteen cases of Phyllodes tumour (PT) with MNGC reported till date, eleven possessed pleomorphic, bizarre-appearing MNSGC and two had bland-looking OLGC. We present a case of borderline PT with multiple foci of both MNSGC and OLGC intermixed together in a hypervascular stromal background. To the best of our knowledge, such a case has not been reported earlier. The case also highlights the dilemma in grading of PT in the presence of many pleomorphic MNSGC. In these cases, Ki-67 proliferation index is important as it is not increased in the otherwise pleomorphic and bizarre-appearing MNSGC. It is also similar to the surrounding stromal cells, implying that MNSGC do not represent a more malignant population of cells. The case details along with a brief review of literature are presented. 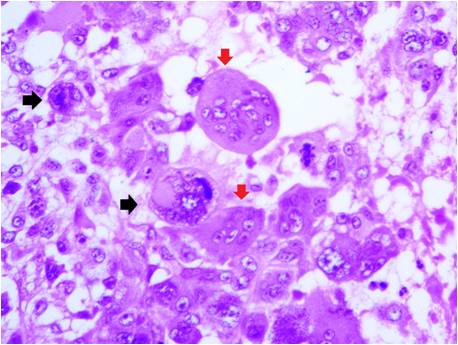