Medullomyoblastoma: a case report and literature review of a rare tumor entity

Medulloblastomas are the most common malignant Central nervous system neoplasms of childhood. However cerebellar midline primitive neuroectodermal tumors containing muscle elements are exceeding rare hence awareness and knowledge of this entity is necessary to make correct diagnosis.We report a case of Medullomyoblastoma that presented as a cerebellar mass of brief duration. Four and half year old child presented with vomiting and headache with convulsions. She underwent total resection of the tumor. The resected specimen showed a tumor composed predominantly of elongated cells with eosinophilic cytoplasm, some showing discernible cross striations (indicating myoblastic differentiation) and focally of round cells with scant cytoplasm (indicating neuroectodermal differentiation). Based on these findings, the differential diagnosis thought of were Medullomyoblastoma, Atypical teratoid rhabdoid tumor, and Metastatic rhabdomyosarcoma. Immunohistochemistry staining revealed positive expression of desmin and myogenin in the elongated eosinophilic cells while the round cells were negative for the same. The round cells were weakly positive for synaptophysin and retained INI-1 protein expression.The travail faced during the diagnosis cued us to report this case. A thorough history physical examination, imaging findings, histopathology and immunohistochemical markers are crucial to arrive at accurate diagnosis in such difficult cases. 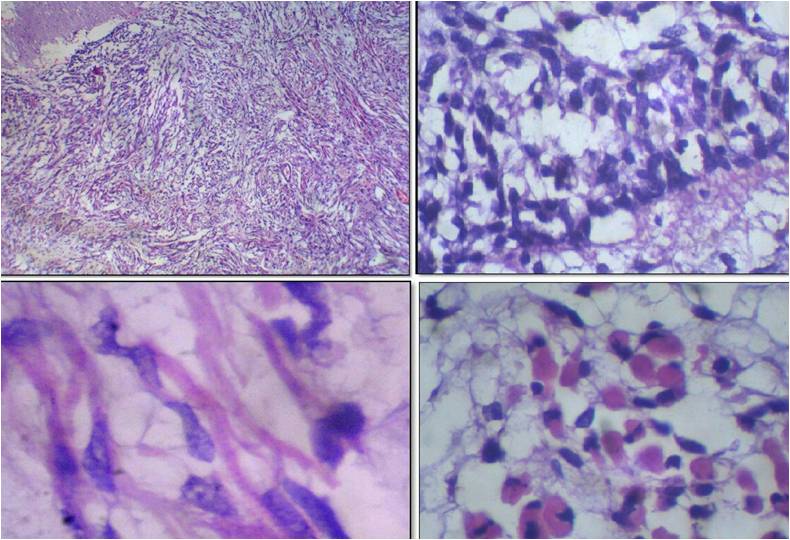