Primary Pulmonary Choriocarcinoma in a male: a rare case report

Primary Choriocarcinoma (PCC) most commonly occurs in the female genital tract following gestational events such as hydatidiform mole, normal pregnancy, abortion and ectopic pregnancy. The tumor also occurs in males. In males, choriocarcinoma occurs most often in the testes. Less frequently, these tumors have also been reported in other organs such as the urinary bladder, kidney, liver, stomach and colon.  Metastasis to the lung is common, but PCC originating in the lung is extremely rare.The authors report a case of a 26-year-old male non-smoker who presented with respiratory distress and constitutional symptoms along with a large left lung mass and bilateral multiple pulmonary nodules. Clinical and imaging findings of testes and other organs were normal. Level of serum human chorionic gonadotrophin was markedly elevated and it raised the suspicion of primary pulmonary choriocarcinoma of the lung which was confirmed by trans-thoracic biopsy from the mass with immunohistochemistry. This is the third case from India occurring in a male. 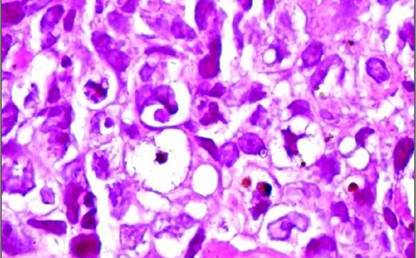