Apoptosis in trophoblast in pre-eclampsia and intrauterine growth retardation: A light microscopy study

Background: Pre-eclampsia and Intrauterine growth retardation (IUGR) affects 3% and 10% of all pregnancies. Apoptosis, a programmed cell death is known to occur as a part of both physiological and pathological process. This study was done to calculate apoptotic index in placental trophoblasts of pre-eclampsia, IUGR and compare it with normal term placenta. The aim of this study is to calculate apoptotic index in cytotrophoblast and syncytiotrophoblast in preeclampsia and IUGR and compare it with placenta from normal pregnancyMethods: A total of fifty four placentas were included in the study. 18/54 cases were from pre-eclampsia patients, 18/54 cases were from IUGR patients, 18/54 were age matched controls. Hematoxylin and eosin stained sections from representative were screened under oil immersion using Olympus microscope (100X) for apoptotic bodies and apoptotic index was calculated by counting the total number of apoptotic bodies and  dividing it by total number of nuclei counted in the trophoblasts multipled by 100. Data was entered into Microsoft excel data sheet and was analyzed using SPSS 22 version software. ANOVA was the test of significance used. P value<0.05 was considered significant. Result: Apoptotic bodies and index were maximum in cytotrophoblast and syncytiocytotrophoblast of preeclampsia as compared with IUGR and normal placentas. Statistically significant difference was observed in apoptotic index in cytotrophoblast and apoptotic index in Syncytiotrophoblast between three groups.Conclusion: Increased number of apoptotic bodies and index were seen in trophoblast of pre-eclampsia cases as compared with IUGR and normal placentas which may be related to onset of maternal inflammatory syndrome.DOI:10.21276/APALM.1693 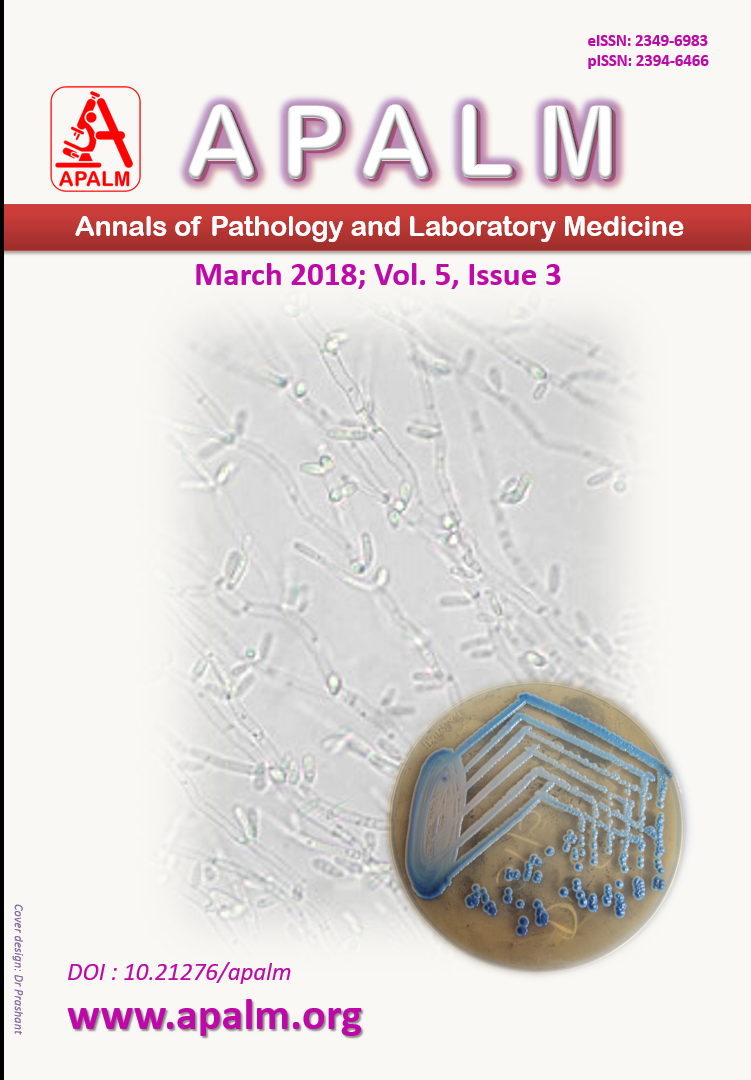