Background: Dengue is a common viral illness which can be fatal. Thrombocytopenia is the common hematological abnormality which can result in catastrophic bleeding. The present study attempts to look at the magnitude of different mechanisms causing thrombocytopenia with the help of platelet indices.Methods: This was a retrospective study undertaken in a tertiary care center in south India. Of all the adult patients admitted for the treatment of Dengue illness between June 2013 to May 2014, Platelet indices such as Mean platelet volume (MPV) and Platelet large cell ratio (P – LCR) of 98 patients were collected and analyzed. Proportion of patients with increased MPV (> 11.5) and P – LCR (>37) was then computed.Result: Among the dengue patients, 56.1% had raised MPV (>11.5) and 59.2% had raised Platelet large cell ratio (>37). This suggested that more than half of the patients had platelet destruction and the rest had bone marrow suppression.  There was significant increase in Mean Platelet Volume (MPV), Platelet Distribution Width (PDW) and platelet Large Cell Ratio (LCR) in Dengue patients compared to the controls.We devised a composite platelet index (CPLI) by multiplying platelet count with MPV which we believe could be a better indicator of bleeding than either alone. In our study we found the median composite platelet index in dengue patients was 5.9 compared to 27. 2 in the controls.Conclusion: Peripheral destruction and bone marrow suppression is seen in equal proportion of patients with dengue illness. 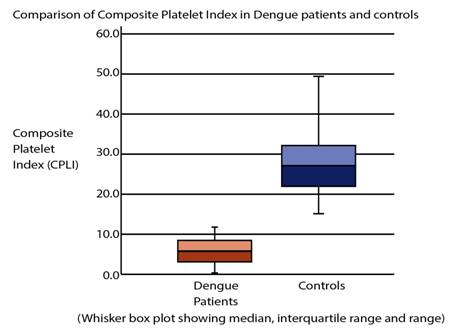