ABO blood group phenotype in and around Delhi: A study from tertiary care hospital

Background: ABO blood group shows marked geographical and racial variation. The study of regional ABO phenotype is extremely important for understanding the regional demand of rare blood groups and to tide over the massive demands in case of natural calamities or mass disaster.Methods: A retrospective study was carried out at Department of Blood Bank and Transfusion Medicine, VMMC and Safdarjung Hospital, Delhi from January 2013 to May 2014 constituting a total of 42,456 donors including both voluntary and replacement donation. The blood group antigens were determined using electromagnetic technology and the frequency is expressed in percentage. Results: B phenotype is most common phenotype constituting 39.84%of total donors, followed by O phenotype with 28.56%, A with 21.24% and AB with 10.56%. A total of 91.16% donors are Rh positive, while the rest are Rh negative.Conclusion: The ABO phenotype of Delhi and nearby regions is different from the western countries, South India and other parts of Asia. Thus this study aids in constructing a regional ABO phenotype data register for meeting regional transfusion demands. 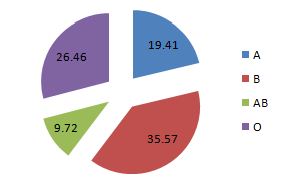